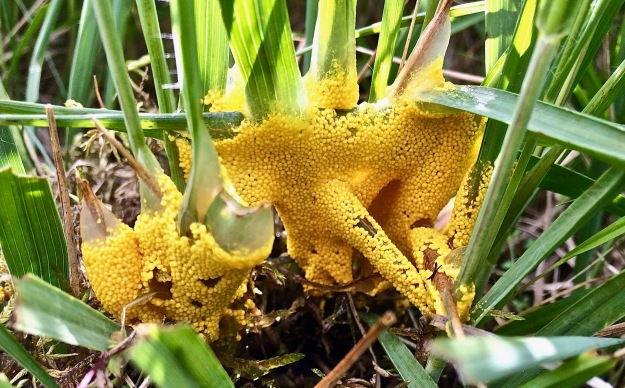 I found this bilious mess in some rough grassland a few days ago. It is colloquially known as ‘dog’s vomit slime mould’. * At a distance it really did look like something the dog had sicked up. On closer inspection I could see that it consisted of a clear gelatinous mass tightly covered in bright yellow granules, which coated the lower grass stems.

Slime moulds (Myxomycetes) are extraordinary life forms: they are neither plants nor animals, although they can resemble fungi. One of the things that is distinctive about them is that they slither about, purposefully shifting from one place to another in search of the microbial organisms on which they feed. It has to be said that they do not move very fast, although recorded times of 1mm per second would be clearly visible, there would be no need to tuck your trousers into your socks. It is best to think of slime moulds, in their conspicuous form, as more of an undifferentiated colony than a single organism and their movement rather like that of an amoeba – to which they are related. Much of the time they live as tiny single cell animals on substrates of one kind or another, but if food becomes short they can aggregate in a bag of slime and start moving as a single body. Eventually this enters a more conspicuous reproductive stage, a bit like the mushroom stage of a fungus, and in this case shows up as acidic yellow slime. It will probably only last a few days in this state before drying out and disintegrating, leaving no evidence of it ever having been there. Many slime moulds, including this one, are quite common, and our cool, moist climate seems to particularly suit them. There is still a great deal we don’t understand about these strange and elusive ’creatures’.

I suppose it depends on your point of view whether you find this organism to be a fascinating and beautiful life form or completely disgusting. Perhaps the alternative and more appetising name of ‘scrambled egg slime mould’ might help make up your mind in its favour.

* a name applied to at least two species, this one is probably Fuligo septica