We recently returned from our annual pilgrimage to Bardsey Island (Ynys Enlli), which is a mile or so off the tip of the LLyn peninsula in North Wales. You can book accommodation there and have a holiday totally immersed in nature. The absence of cars, electricity and phone/internet connection relieve an unconscious tension, creating space that can be filled by the sound of the sea, brightness of the stars at night and a profusion of wild flowers, birds and insects. There is a simplicity and abundance to life here reminiscent of life in Britain 50-60 years ago.

One of the things that happen on Bardsey is moth trapping at the bird observatory. The trap is, in essence, a bright bulb (run off a car battery) suspended over a box filled with egg cartons. This is placed out at night and the moths are attracted to the light, dropping down unharmed to rest amongst the egg boxes. Each morning a group of us huddled round to see what has been caught overnight. Newcomers were hesitant and a bit mystified, peering into the crevices of the egg boxes as they were lifted out, marvelling at these unfamiliar insects. The observatory catches moths to record the numbers of each species day-to-day, year on year, so contributing to monitoring our wildlife populations. A less explicit reason is for the sheer wonder of examining close-up these otherwise unseen nocturnal creatures. Some of them like the garden tiger are big and brash, whilst others are paper thin and tremulous, seemingly too delicate to live. 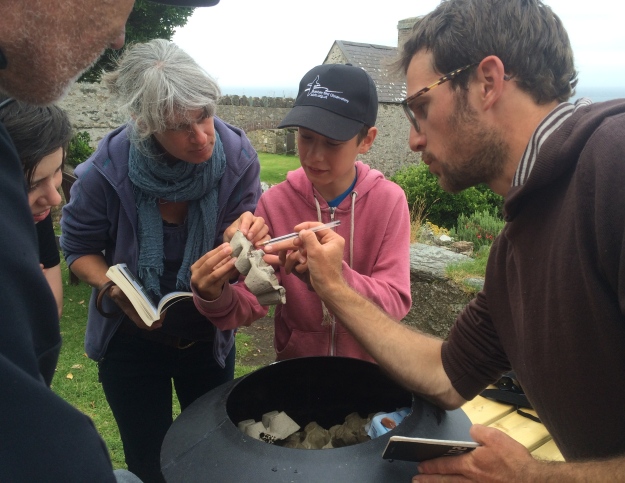 My grandson Nils eagerly called out the name and numbers of each species with impressive accuracy; Mark, an assistant warden at the observatory, confirmed these with a nonchalant glance – expertise born of long practice. Moths have fascinating and sometimes eccentric English names, amongst those we caught were: the lackey, ingrailed clay, mottled beauty, july highflier, true lover’s knot, smoky wainscot and the scarce footman. I found myself imagining a Mills and Boon plot where the mottled beauty and scarce footman are bound together by a true lover’s knot – perhaps the lackey has a part in there somewhere? 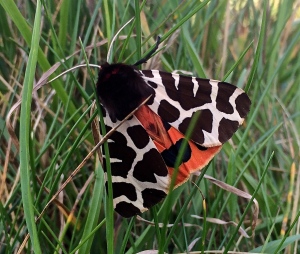 Moths can occur in large numbers given the right conditions, as anyone who watched the recent Euro 2016 football final in Paris on television will have noticed; moths were everywhere, there must have been tens of thousands of them. Apparently the stadium lights had been left on all night creating, in effect, a gigantic moth trap. By the time the match kicked off the next day the place was crawling with moths, most of which were the silver Y, named after the distinctive shiny marks on its wings, which its scientific name Autographa gamma describe much more accurately. This is a migrant species that must have been passing north through Paris in very large numbers – some no doubt destined for the UK.  However events like this can be misleading as to the overall health of our moth populations. The Rothampstead Insect Survey, which has been trapping moths throughout the UK since 1968, has shown that overall abundance has decreased by 28% in that time and this rises to 40% in southern Britain. The spectacular black and white garden tiger, which has bright orange hind wings, has declined by as much as 92%; although it seems to be holding up on Bardsey – we caught 14 one night. The reasons for these declines are complex and multi-factorial but are overwhelmingly due, directly or indirectly, to human activity. 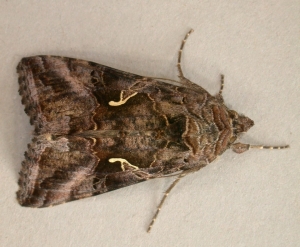 It seems sad that you now have to go to the ends of the (Welsh) Earth to get a glimpse of the wild abundance that was available to every country child not so long ago.