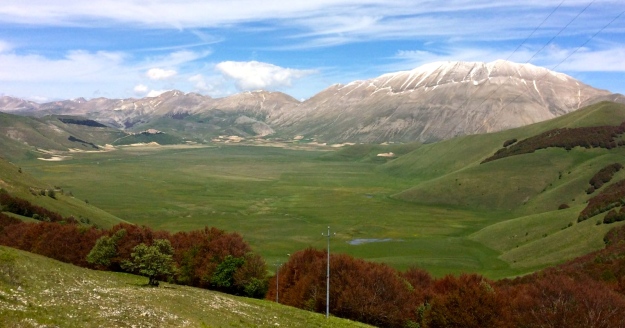 Rounding the bend in the road we let out a collective ‘WOW’ for spread out below us was a view as beautiful as it was desolate. It looked more like Tibet than central Italy. Ringed by the snow-streaked mountains of the Sibillini National Park was a dead-flat high altitude plain known as the Piano Grande. Apart from some high level patches of beech forest, whose tender new leaves had been scorched brown by a late frost, there was not a bush or tree in sight. Standing there in the cool mountain air this place seemed empty and forgotten.

Motoring down into the valley two things were immediately striking: its flatness and the chirping of thousands of crickets. The plain was once a glacial lake which has left behind a soft alluvial soil, and the crickets, whose burrows were everywhere, were confined to it like frogs to a pond. This deep soil is highly fertile and for many years farmers have grown lentils here, which are famous in Umbria and named after the village at the far end of the valley – lenticchie di Castellucio. No artificial fertilisers or herbicides are used in their cultivation; whether by preference or regulation, I am not sure. This, plus the limey soil and mountain climate produces a fabulous display of wild flowers, which bloom in the fallow and harvested areas, as well amongst the crops. It was these that had brought us here. 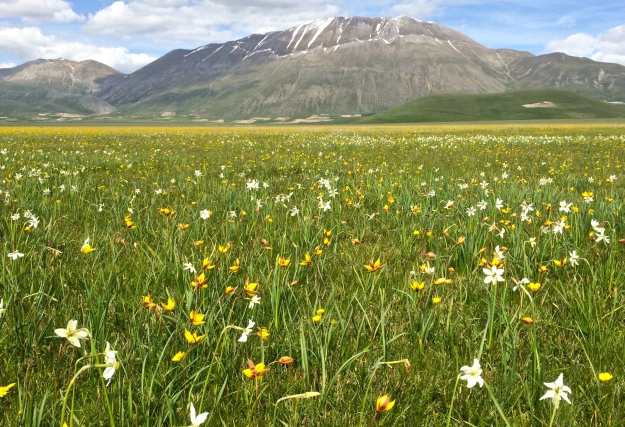 From afar the plain appeared only green with some distant bands of yellow but as we walked out on to it the flowers were all around our feet. On the drier ground were countless grape hyacinths, yellow and purple mountain pansies and deep blue gentians. Further out, where it was wetter, thousands of white narcissi mixed with yellow tulips, whose pointed petals were tipped with orange. Scattered amongst them were deep purple green-winged orchids. Standing in this sea of flowers, ringed by mountains with skylarks pouring out their song overhead felt like a version of heaven. Later in the short season this plain will be washed with deep reds and blues from the next round of flowers to be painted onto the valley floor. It is a rare thing to witness such wild profusion. 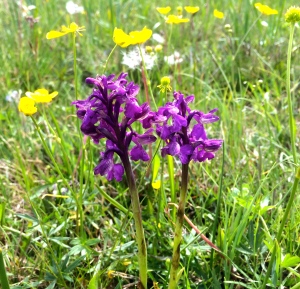 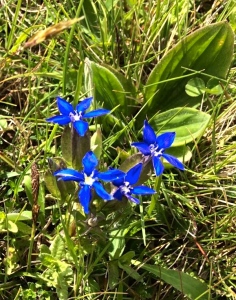 On the valley sides we could see two flocks of sheep being moved slowly forward by shepherds and their dogs. It seems remarkable that in twenty-first century Western Europe there are still shepherds following their flocks in that age old biblical way. The sheep were gradually converging on a narrow valley where a thoroughly modern solution to sustaining the ancient system of transhumance (moving to the mountains for seasonal grazing) was arranged: a section of hillside was enclosed by an electric fence to pen the sheep at night, two modern caravans for the shepherds and 4×4 vehicles to tow them completed a set-up that could easily be moved to another part of the valley for fresh grazing. I was particularly interested to see the dozen large Maremma dogs at the camp, as this breed, indigenous to central Italy, is kept to defend the flock at night from the attacks of wolves. The wolf population in Italy, as in many areas of Europe, has been increasing in recent years. 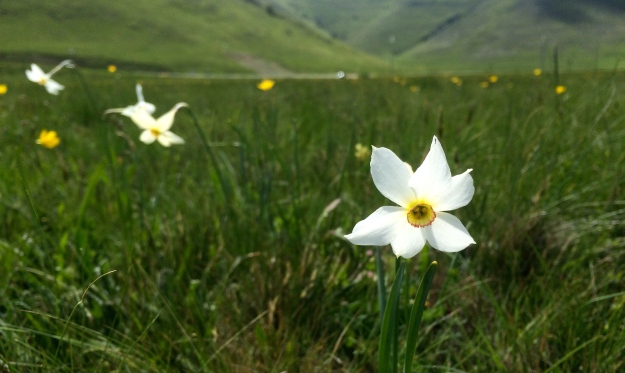 The hilltop village of Castellucio at the other end of the valley had a distinctly end-of-the-line, frontier feeling. Framed against the bare mountains the ancient buildings and tourist shacks looked more like Nepal than Western Europe. Local people told us they have 10 months of winter here; it had snowed two nights previously. The picturesque village, with narrow winding streets climbing up to the church has only eight remaining permanent residents, and some of those are here for obscure tax reasons apparently. The rest of the houses are holiday homes mostly used in the short summer season. 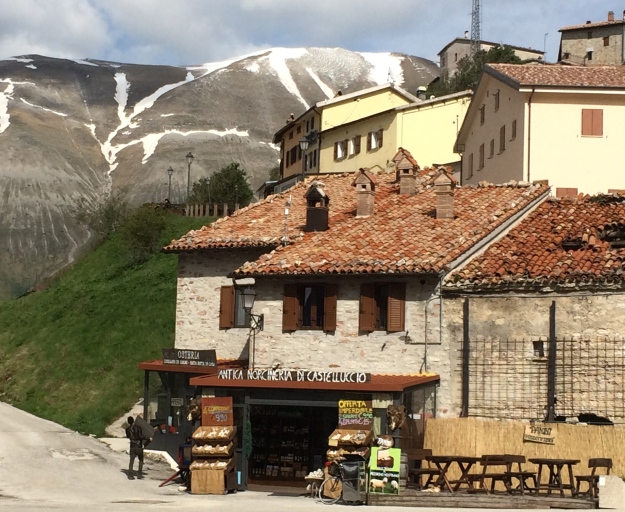 The Piano Grande seems a vivid example of our ever changing relationship with the land: rural depopulation as people leave for the towns, an increase in wolves as livestock farming declines, trekking and wildflowers as seasonal tourist attractions. I wonder how much longer sheep will be brought up here for the summer grazing? If that should stop perhaps spontaneous reforestation of the mountainsides will be next, and bears will follow.

1 thought on “Not Just a Load of Old Lentils”