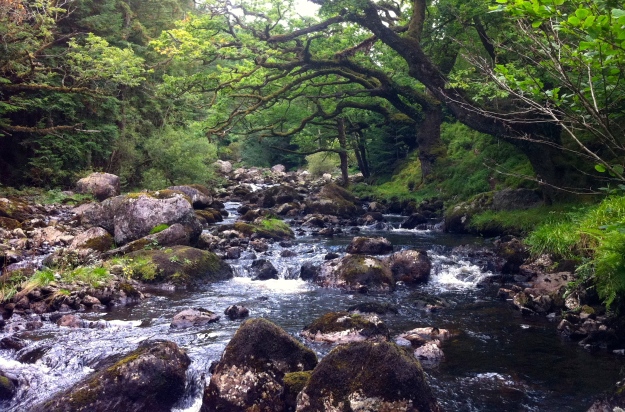 The Afon Lliw, which runs down our valley, is a typical mountain river: rocky, shallow and fast. About a mile upstream from here it cascades through a gorge littered with boulders ranging in size from a suitcase to a small car. When levels are high the water smacks against the stones, sending up a mist of spray that settles on your clothes and hair. Lining the banks are oaks, ash, hazel and behind them, walls of conifers forming a canyon of trees. These conditions combine to produce high humidity and relative shelter in this short stretch of river. For many mosses, liverworts and lichens this is very good news. The boulders are plastered with a green, brown and grey patchwork, which in close-up resembles the canopy of some exotic rainforest. Twisted bankside oaks are decorated with filigreed lichens like long-service medals. High up on one ash tree is a patch of tree lungwort: a scarce and extraordinary looking lichen – veined, membranous and parchment thin – said to resemble the lining of lungs. This is an atmospheric place that seems as though it has been unchanged for an eternity.

On 3rd July 2001 3.5 inches of rain fell in 3 hours in the river catchment, and that wasn’t all of it. A wall of water gathered in the upper Lliw and hurtled down the valley gaining force as it went. It was laden with boulders, timber and gravel that sliced and blasted the riverbed and banksides – killing and maiming trees. The ash tree with the lungwort has a 6-foot high scar to prove it. Lower down, this cataract swept caravans from a field and smashed them against the bridge at Llanuwchllyn. It was a once in a hundred years kind of weather event. By the time it was over the gorge had been stripped of vegetation and completely reconfigured.

This summer a concrete weir was built across the Lliw just above the gorge. An intake pipe in the water, just upstream of the weir, has been routed underground down the hill, parallel to the gorge. Through this the river water flows with accumulating force to a pumping station at the bottom, driving turbines which generate electricity to be delivered to the national grid. The water is then returned to the river nearby. Small hydroelectric schemes like this, with financial incentives from government, are springing up across North Wales – we have steep mountain rivers. Renewable energy may yet save us, and our wildlife, from the worst consequences of climate change. This scheme is a small contribution to that.

At first sight this would seem to be a conservation success story; only local disruption to the river around the weir and renewable energy generated for years to come. But there is a snag. Growing in the gorge are a number of ‘oceanic’ mosses and liverworts, so called because they are restricted to Atlantic coastal areas in Europe, especially in the damp of western Britain and Ireland. This makes them of particular conservation importance. These are mostly small plants; some are tiny, growing on rocks, trees and occasionally soil. They are fussy about where they will live, having particular requirements around such things as humidity, water levels, shelter and aspect. In truth there is still much we don’t know about the needs of individual species.

Identifying bryophytes is a specialist business; even to many naturalists they seem obscure. I wanted to understand more about those in the gorge so I asked my friend Andrew Graham if he would show me some. Scrambling over the slippery river boulders we found an intricate and fascinating matrix of blobs, tufts, lobes and filaments, many of which I found hard to distinguish from their neighbours. Andrew showed me one special liverwort growing on the stems of a moss that, even through a hand lens looked like nothing more than a blob of creamed spinach. By the end of the afternoon it became clear to Andrew that these plants were much diminished compared to 20 years ago when he and his sister had surveyed the gorge. We concluded that the flood of 2001 must have blasted many of them away. 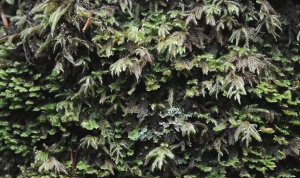 The snag with the hydroelectric scheme is that, except in times of drought, up to 40% of the river’s flow can be diverted down the intake pipe, and so missing out the gorge. Will less water and reduced humidity threaten the survival of some of the special mosses and liverworts? It might. The great flood of 2001, a seemingly natural event, probably did enormous damage to these specialised plants, but at least re-colonisation is still possible, even if it takes 100 years. Permanently reducing the water flow might be even more damaging in the long run. Then so might felling the conifer crop that forms the sheltering canyon; on the other hand they can’t have been there for longer than 50 years. There are many imponderables.

The complexity of this one small conservation problem brought it home to me just how difficult it is to anticipate the effects of our actions. Getting it right for species such as otters or kingfishers is comparatively easy. They are large, appealing and we know a great deal about them. It is a different story with these obscure and little understood plants. Also, which would have been the greater benefit: generating some renewable energy which helps reduce greenhouse gas emissions or saying no to the hydro electric scheme and so ensuring there was no harm to the plants in the gorge? It seems to me we have an obligation to minimise harm to all living things, but there is no doubt the practice of that can be very demanding.

1 thought on “All Creatures Great and Small”