The block of forestry behind our house used to be a sombre place; forty-year-old spruce trees creaking and knocking in the lifeless gloom, their pillowing needles suffocating the forest floor save for an occasional fern. When the sunlight did find a gap it shone a light on nothing much at all. It would be hard to find a more joyless place. Only in the canopy was it ever-green, and there robins, blackbirds and the like found a home along with a few siskins and the odd crossbill.

Then one spring day, seven years ago, a man turned up with a sexy looking Finnish tree harvester and set about the place. Within three weeks he had felled the lot – by himself. It was extraordinary to watch. From his cab O.G. (as he is known locally) felled the trees with an automated chainsaw on the end of the machine’s arm; stripped the branches by flossing the trunks through mechanical teeth and cut the timber to length as slickly as slicing cucumber. He told me he had spent nine years ‘on the saws’ before learning to operate one of these voracious harvesters, which effectively replaces a gang of men. When we spoke he was tinkering with the machine, which had broken down. He could do a bit mechanically but if it was the computerisation he was stumped. I asked him what happened then. “I’ll phone Helsinki, they’ll sort it out,” he said, tapping his mobile phone.

What he left behind was devastation: churned mud, broken limbs, amputated stumps, tangled brash. The place was trashed and left, like an abandoned battlefield. To my surprise I found it liberating. The landscape had been turned on its side from vertical to horizontal; I was no longer inside it but on top of it. Within days fern fronds, now flooded with light, were uncurling in brilliant green. After three weeks smashed birch trees were sprouting new growth and brambles had begun to feel their way across the turmoil. Dozens of swallows and house martins sliced back and forth in the new space liberated by the felling. A flock of a hundred meadow pipits joined them, combing through the wreckage for days on end like a search party after some gigantic crash.

Fast forward to the last two or three years and the place is transformed once again. Softer and greener now as the replanted spruce begin to win the growth race against the sallow, birch and rowans. All are waist deep in a glorious tangle of bramble, brash, rushes and rotting stumps. This labyrinth of hiding places punctuated by song posts has gifted us new birds: reed buntings, tree pipits, whitethroats and the purring invisibility of grasshopper warblers. Butterflies flick back and forth and dragonflies patrol the edges. There are frogs in the ditches. Along the rough forest road the flood of warmth and light nurtures an annual burst of colour as drifts of rosebay, ragwort and thistles line the roadside like a street market from which bees, wasps and flies gather nectar and pollen. Less competitive flowers such as eyebright, fairy flax and trailing St John’s-wort have colonised the seedbed of the open gravel. Delicate pink bird’s-foot, which probably arrived here on machinery tyres from some other forest road, is gradually taking hold on this one. 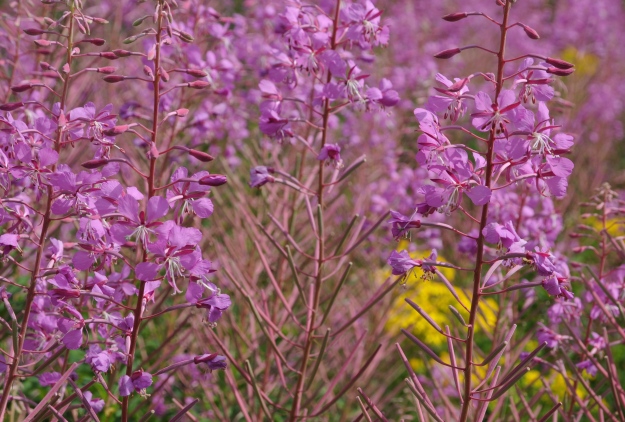 This is their moment in the sun. The young spruce trees are growing at a prodigious rate and the lifeless gloom is beckoning again. In 20 years from now the forest floor will be as dead as a doormat and the siskins and crossbills will be back in the canopy. But before then O.G., or somebody else, will back with an even slicker machine to knock hell out of another block of this forest, and it will all begin again as the light floods in and the whitethroats begin to eye it up.