Cefn Prys with ‘the field’ in foreground. Drawing by Peter Hanauer July 2019

After 35 years we are leaving Cefn Prys, our beautiful home in the hills of North Wales. There is too much of a lump in my throat to write much about that right now, but suffice to say that it has been a fine love affair between people and place, I don’t think either could have asked more of the other.

One of the advantages of staying put for so long is that you notice the slow and subtle changes. The five-acre field outside our kitchen window was much like any other 30 years ago. I suppose it was agriculturally improved at some time – although there is not much rye grass to be found in it now. Most of the pastures on surrounding farms have been drained and reseeded, then receive regular doses of fertilizer, or at least a slathering of slurry from the cattle housed indoors over winter. Consequently the fields are bright green with highly nutritious grasses and nothing much else; they are wildlife deserts.

About 25 years ago our neighbour discovered that he had Type 1 diabetes, which limited him to the extent that he came close to selling up. But he decided to stay and adopt a “low input low output” approach, which demanded less of him physically. Since then his fields have not been reseeded, fertilised or treated with slurry and, due to his low stocking rates, only lightly grazed. He mostly runs an ‘open gate’ style of stock management so the sheep can graze where they choose; but for some reason they don’t favour the field below our house in the spring and summer. Consequently by early July the grass ripples in the breeze like a hay crop – but it doesn’t get cut, so the flowers and grasses freely set seed. Then through the autumn and winter the sheep and a few cattle graze it short once again. Under this regime the field has gradually, almost imperceptibly, changed.

Last evening, when the day had cooled down a little, I strolled through the field, squinting into the low sun, to see what I could find.  The tawny grasses twitch and ripple like the flank of an animal as I brush by. A yellow spread of greater birdsfoot-trefoil and autumn hawkbit underscores them and is everywhere underfoot. Butterflies: meadow browns, ringlets and this year scores of small skippers dance and dart, sipping nectar from the birdsfoot–trefoil and stately marsh thistles.  I kick up a small blizzard of pale translucent moths from between the grass stems. A whole childhood of grasshoppers flick and clamber away from my boots, then settle back to their lazy stridulations, sounding like a host of old fashioned bicycles free wheeling into the sunset. 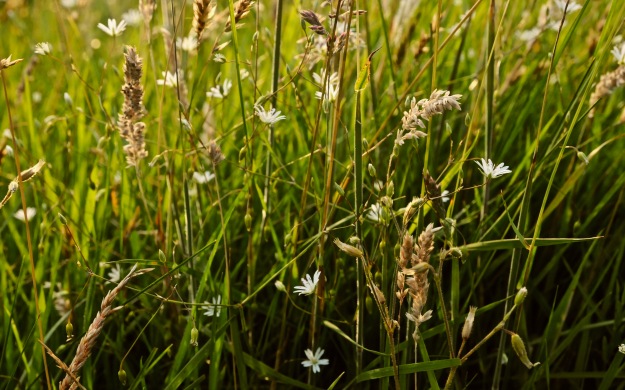 Dotted amongst the grasses are common mouse-ear, lesser stitchwort, selfheal and the gone-to-seed heads of pignut; this latter a recent colonist, probably from the wild bank in our garden, itself a fragment of old meadow. Where the field slopes down to the stream are clumps of soft rush interspersed with scrambling marsh bedstraw and more nectar-rich marsh thistles. Flying between these are the svelte sparks of six-spot burnet moths, dressed for the opera in their dark-grey and crimson velvet. This is the first time I have seen this lovely day flying moth here. All around me swallows are weaving a cat’s-cradle of flight above the grasses, picking off the abundant insects.

I am not suggesting that this meadow is some undiscovered gem that would have conservationists salivating and snapping into ‘protect and manage’ mode. It is an ordinary field that has, by chance, been given a bit of elbow-room. Neither do I want to misrepresent my neighbour, who, although a thoroughly decent man, would be amused to be described as a conservationist. When I complimented him on the growing richness of his fields he candidly told me that if it hadn’t been for his diabetes they would not be looking like this now.

Standing here in the low evening light is heart warming and nostalgic: I remember (just) when most ordinary countryside was brimming with wild flowers and insects; it was our unquestioned normality. Not anymore: but this field shows that, given half a chance, nature will breathe life back into the grass again.  Sometimes it pays to do nothing – although my neighbour would probably not agree.

1 thought on “Given Half a Chance”