Above the Conway valley where the rich improved pastures run out and the ‘rough’ begins, a maze of small fields enclosed by stone walls occupy the in-between land, known as ffridd in Wales. I had been told there is a place here where wild daffodils still grow – if you can find it.

Picking a window in a week of biblical rain, Elen and I drove up the twisting single-track road and parked where the tarmac ran out. Armed with local intelligence and a good map we set off walking. This is land of rock and water: steep irregular fields gridded out with high stone walls and noisy streams tearing through every gap and crevice.  The pastures were studded with gorse and tussocks on the drier slopes and squelching bog-land half submerged in water at the bottom. Despite a few celandines in flower and bluebell leaves poking through the rough grass it felt bleak and abandoned up here. However you can be sure that a place new to you, that feels obscure or confusing, is somebody else’s backyard. The ewes and lambs in these fields will be fed and cared for every day by somebody who knows every inch of this place. But we did not, so we blundered about advancing and retreating until, eventually, we found a ladder stile into a place that looked more promising.

This steep enclosure had ash and hazel woodland lower down and bracken covered slopes with scattered trees higher up. It is a place right on the cusp, where the valley woodlands give way to the rough hill land above. From the stile we could see dabs of yellow and soon found hundreds of daffodils amongst last years crumpled bracken fronds. The snag was that many of the flowers (but not the leaves) had been eaten down to a short yellow shaving brush and of those that hadn’t most were still in bud. A scatter of fresh sheep dropping suggested the culprits; probably the daffodils were early due to the unusually warm weather in February, so the sheep were still there when they came into bud. I felt rather deflated and pottered about disconsolately, photographing the few that were in flower. Elen went off exploring and soon came back with better news: in a sheltered spot at the bottom of the wood, out of reach of the sheep, was a mass of flowering daffodils.

Daffodils are so quintessentially domestic I wasn’t sure that I could believe in them as wild flowers; but these were convincing. About nine inches tall with pale yellow petals framing a golden trumpet they emerged from sheaves of blue-green leaves amongst the bracken litter. There was something delicate, almost dainty, about them compared to their domestic cousins, but they must be tougher than they look to survive up here. Several big ash trees had come down in the recent gales, their surprisingly shallow root plates peppered with rocks; but the daffodils will have survived worse than that. Apparently there are 26,000 cultivated varieties of daffodils listed by the RHS, many of which have found their way into the countryside, more by design than accident, in the main. The native daffodil, although much reduced is still widely, if patchily, distributed in England – but it is scarce in Wales.They seem to favour oak and ash woods, scrubby banks and bracken and particularly lowland pastures in counties such as Hereford and Worcester. This population has survived and prospered thanks to the efforts of local conservationists, and latterly the Snowdonia National Park who paid for the fencing and compensate the farmer for his loss of grazing during the flowering period. It is impressive that somebody is quietly putting in the money and effort in this out of the way place to ensure we still have wild daffodils; a small triumph over adversity in these difficult times.

On the way back we visited Llangelynnin church, which is only half a mile from the daffodils. The present building, dating from the 12th century, crouches low behind an impressive protective wall; it seems more geological than built. At close to a thousand feet, surrounded by rough grazing and with no direct access by road it, like the daffodils, also felt on the edge. The bare simplicity of its interior touched me, there was an accumulated quiet that goes beyond silence. This was a central place in a human community once. Few people live here now but there are fresh flowers above the altar and services are still held monthly in the summer: another place of quiet caring. The irony is that when Saint Celynnin established the first religious settlement here in the 6thcentury this wasn’t the upper edge of settlement at all. The wooded valley with its navigable river was a dangerous place then and most people lived up here, above the trees. Earlier still the rich collection of standing stones, hut circles and ancient cairns on the hill country above here testify to a more equable climate when the habitable edge was even higher. Perhaps the daffodils were higher too, on an edge that seems almost inconceivable today. 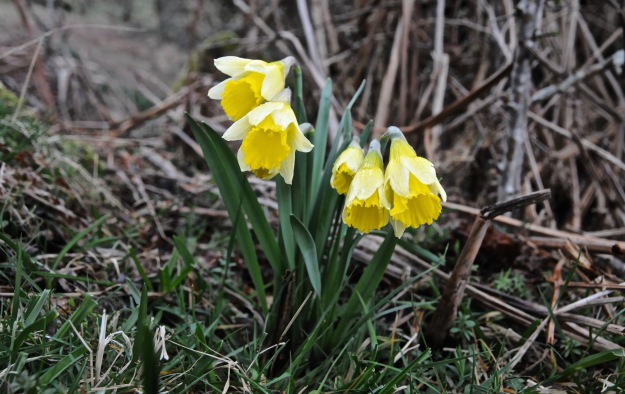 Special thanks to Becca Crane – without her directions we would never have found the daffodils.

5 thoughts on “Life on the Edge”