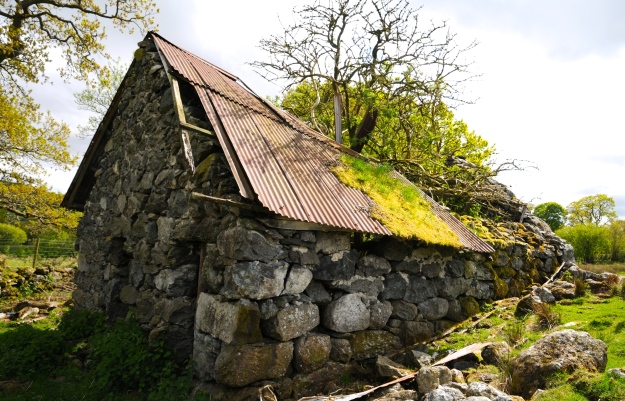 Thunder was rolling around the valley and large raindrops began pattering down ahead of some ominously dark clouds bearing down from the mountain. I cut across the field towards a small derelict barn that might offer some shelter. More than half its roof had gone, jagged corrugated iron ripped away by decades of clattering wind.

At the near end the roof was intact so the floor drier, especially in the corners where stones from the collapsing walls were piled up. The place was a midden; stinking of sheep shit piled up like guano on the fallen stones. At the further end was a near complete sheep skeleton, its spine arched back as if in pain. The floor was strewn with fallen beams, sodden and rotting in the mud and dung. Despite having much of its roof missing it was a claustrophobic place, made so by a huge elder tree that crammed the space and had burst out where the roof should have been, its canopy a triumphant umbrella over the gap. I had rarely seen an elder so big. It had no doubt fed well for fifty years or more on all that nitrogen rich dung and urine from sheltering sheep. Otherwise all it needed was the hole in the roof to get started and nobody to give a damn about this building to keep going. 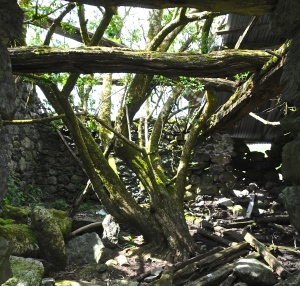 With the rain drumming on the corrugated iron I began to look around, squelching through now liquefying mud. This building was well put together. There was no sign of the original roofing slates, presumably reused on another building, but the eight-foot high stone walls had been skilfully built and some of those stones must have been a heck of a weight to handle. The joints had been carefully mortared on the inside. At the dry end there was a well made wooden door, now forever closed by fallen masonry, which had two satisfyingly neat wooden lift-latches. The sodden oak trusses had individually cut sockets for the fallen beams. A short length of hand-forged chain with beautiful twisted links lay half buried in the mud. I couldn’t resist pocketing it.

Standing there in mud and gloom I began to feel sad and a bit disgusted, tainted by a familiar melancholy about ‘falling-down Wales’. It was tempting to imagine this barn was built in happier times – but they probably weren’t. And nobody was to blame for its neglect despite my urge to look for a guilty party. It was a utilitarian building whose time had passed. I wondered why I wanted the building to survive; it was clearly no longer useful to modern farming. There are thousands of beautifully made derelict barns in Wales. What was appealing was the care taken in the craft and construction of this ordinary building, built to house animals or store hay. Nowadays it’s the sort of work reserved for artisan guilds or specialist craftsmen; then it was the only way they knew. Somehow the unavoidably slow, careful making by local hands connected me to then. It had a sense of human continuity and scale that felt right. For all its elegance of design, precision of construction and complexity of function I cannot feel that about an iPhone.