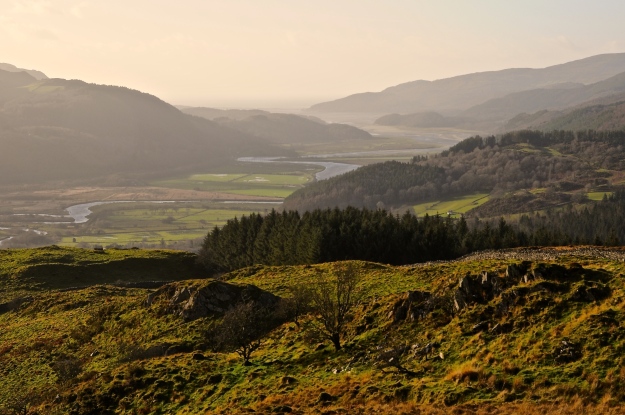 It seemed like like January 1st would be an auspicious day to start this blog, but when it came to it the wind was howling in from the south-west and the rain horizontal. I never stepped outside.

However the following day dawned clear and frosty, and the wind had dropped a bit; a good day to step out. We chose Precipice Walk, a popular local route around a hill that thrusts out above the Mawddach estuary like the prow of a ship. The path winds through rough hill ground scattered with rowans,holly and wind-cut hawthorns. In summer the yellow and magenta flowering of the bell heather and western gorse swirl together here like plums and custard, but at this season they are withered into dull submission.

This is a lofty place with a great arch of sky, a vantage place to see buzzards wheeling or ravens flipping over in their pair bonding flights, the familiar croaking call interspersed with clear bell-like notes that echo across the valley. About forty-five minutes in we excitedly identified a peregrine, its pale underside catching the light far below us in the valley. It steadily circled upwards until, at our height, abruptly swerved southward and with muscular power accelerated, sliceing across the hillside, and was gone; a thrilling sight enhanced because we knew it was a peregrine, a bird mythologised as a top predator and the fastest bird on earth.

The climax of this route, for most, is the prow of the hill which stares straight down the estuary and out to sea. Too your left is the towering escarpment of Cadair Idris, and to the right the 600m Y Garn  framing a view across Coed y Brenin forest to the misted mountains of Eryri in the distance. Between these spreads the estuary with the Mawddach river snaking between sandbanks out to the hazy waters of Cardigan Bay beyond. It is sometimes said that this is the most beautiful and unspoilt estuary in Britain and, standing there in the weak winter sunshine, I was more than ready to embrace that .

For a short distance further on the uphill side of the path was fringed with aged and twisted common gorse bushes. Attached to some of the dying stems I was delighted to find brilliant orange blobs of the gelatinous yellow brain fungus, whose flabby folds are lip-soft to touch yet strangely impervious to the weather, sometimes persisting for months.

Near the end of the walk is a fine patch of woodland full of ghost-grey ash trees and purple crowned birch that promise bud burst even at this most dormant season. At the apex of the wood is a stand of ancient beech trees, no doubt planted by nearby Nannau estate 300 years ago or more. It has been a very good year for beech mast, those small triangular nuts that are the seeds of beech, and the fallen nutlets had attracted a flock of finches,about150 strong, flicking and twittering amongst the trees. The majority of these were bramblings, winter visitors from Scandinavia, that I usually only see in ones and twos; so this was a notable find. After a while I’d had my fill so I lowered the binoculars, and then realised I couldn’t actually see the individual birds feeding amongst the moss and leaves on woodland floor, only register the flickering of their movements, like some disembodied radar signals or electrical impulse; as though the ground itself was twitching into life.

So it was an auspicious day to start the year/this blog and yet, despite the magnificence of the estuary and the thrilling power of the peregrine tearing up the sky, what hung in my mind when I got home were two details: the livid strangeness of the yellow brain fungus slapped on the stems of ageing gorse bushes, and the seething energy of the forest floor twitching with bramblings.

2 thoughts on “An Auspicious Day”