About thirty years ago a rather morose man in a flat cap arrived with a large excavator to dig a pond on land adjoining our garden. I did my best to influence shape and form, but to him a pond was a hole in the ground – and he dug a deep one. A few years later we managed to buy the land and, with the help of a more sympathetic contractor, perform some cosmetic surgery on the pond, making it more suitable for wildlife.

Situated below the house and ringed with trees the pond forms a natural bowl, a place that ‘holds’ you. It is perhaps the most intimate and contemplative place in our rambling garden. Sometimes I sit with my back against the sycamore tree, feet in the wood sage, and just soak it all up. In summer warblers, flycatchers and swallows swoop and snap at the throng of insects nectaring on the pale pink umbels of angelica. On the opposite bank a fine bramble patch has developed and last year a pair of garden warblers reared a brood in its tangled depths.

A succession of dragonflies emerge from late spring to early autumn, including two or three species of turquoise blue damselflies, drifting like flying matchsticks across the water to settle on the pondweed that paves the surface. Later, the powerful and highly mobile southern hawkers patrol the space like border guards, snatching less able insects into their predatory embrace. On summer nights the streamlined forms of diving beetles leave their watery element and (amazingly) take flight, only to be grounded by our outside lights.

Bulrushes and yellow iris grace the margins, making it a proper storybook pond, whilst providing watery mats of vegetation where frogs deposit their spawn. Sometimes 300 or more burp and writhe in each other’s passionate embrace before melting back to wherever they came from; their legacy is thousands of wriggling tadpoles. At that season a heron flights in each day for some amphibious pickings; standing as hunched and immobile as his human counterparts. Once a pair of mallards hatched seven ducklings and the female escorted them in single file, like a lollipop lady, up to our lawn for scattered bird food. Anguished, we watched as each day there was one less duckling; the crows picked them off, until there were none.

Magically, most this wildlife abundance arrived by itself, apart from the iris, we have introduced very little. We started with a muddy hole and sat back. Over 25 years or so the pond has progressed from sparse, to luxuriant, to choked, so by last summer very little clear water remained. Silt and the prolific growth of marginal plants were swallowing it up. That is the way with ponds, they are only transitional things really, always on their way to becoming something else. For many years we tried to control the rampant vegetation by hand. I well remember one hot summer’s day when Gethin spent hours up to his chest in muddy water doggedly pulling out clumps of sweet-grass, but it was a losing battle. Reluctantly, last autumn we hired another man, with an even bigger machine, to sort it out. We needed a big machine to get enough reach from bank to centre but the trouble is, even with a driver as skilled as Eddie, if you use a big machine you get a big machine job. Apart from a few bit of iris and other marginal vegetation left for re-colonisation, it is ground zero out there now. We are back to a muddy hole, with a few lost water boatmen rowing to nowhere.  Goodness knows how many organisms perished in the maw of that machine. 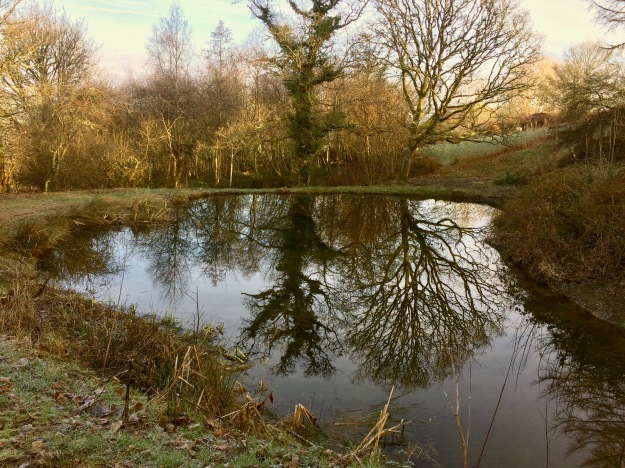 It looks like ecological vandalism. But I knew from hard won experience that a bit of conservation gardening would never be enough. Most of the wildlife in our countryside arose as an accidental by-product of agricultural operations, many of them brutal. But given a half decent chance natural processes will always reassert themselves. So I am certain that, as long as we sit back, in 5,10 and 20 years time the pond will be bursting with successional stages of plant, insect and bird life all over again – and eventually somebody will be tutting over what to do about an overgrown pond.

2 thoughts on “To Begin Again”